Other IDs from the record include: 704

The recording on the other side of this disc: Holy Night

Reviewer: spadeneal - favoritefavorite - January 11, 2018
Subject: 1922 78 rpm record
The release date of Triangle 11168, although not documented in ODP and other places, lands squarely in 1922, probably in the fall in advance of the Christmas season. However the NYRL matrix of 704 places the recording in 1920 and, indeed, this coupling was already issued on Paramount 33069 in 1920. Triangle records largely follow the release sequence of Puritan, a 35 cent lanel, and while a different coupling is documented for Puritan 11168 it is possible that both this and the other record appeared on Puritan under the number 11168. 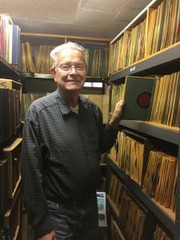